Ladies : This attracted 12 pairs, a full house! – and this included 6 pairs playing in the competition for the first time. The club house was buzzing and there was a great atmosphere throughout the afternoon. Debbie Ryder and Rachel Gray were the winners with Cath Pearson and Katherine Rogers as runners up.

Mens : 7 pairs contested the Mens’ Smiths Cup one day doubles tournament on Sunday 7th April. The round robin format involved each pair playing a short set against each of the other pairs during the course of the afternoon. Most matches were very evenly contested and in the end countback had to be brought into play to determine the overall winners. Chris Cole/Mark Hill and Steve Dunne/Chris Iles both managed to win 5 of the 6 sets they played, but Chris and Mark were crowned champions, having conceded one less game overall. Mark Hill is to be congratulated on successfully retaining the title he won last year, albeit with a different partner this year.

Thanks to Suzie Greenwood and William Carlisle for organising their events. 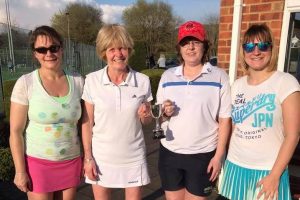 Great afternoon at the Ladies Smith’s Cup yesterday (Saturday April 14th). The weather was fabulous and there was some great tennis played. Well done to the winners Elaine and Sam pictured above with the runners up Lorraine and Sam.
Good turn-out and excellent cakes! 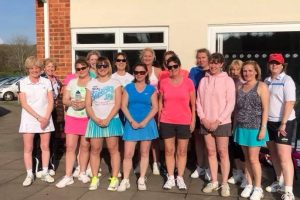