The weekend of April 16th and 17th was very busy for the club with three competitions being run. First up on Saturday morning was the Quorn Family Tennis competition, a mixed event for a child under 10 and an adult member of the family. It took place in dreadful weather, pouring rain at times and yet there was a good turn-out.

By the afternoon, the weather had improved somewhat, though still very cold. The Ladies Smith’s Cup was then played. There were 7 pairs and Joan McCrossan and Sally Charlton emerged as winners beating Sarah Henbry and Claire Davies in a tie break in the final. Good tennis and a great tea so not all hard work and running around! 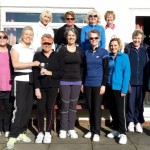 Sunday afternoon – and the Men’s Smiths Cup tournament.It was played in beautiful Spring weather and the five Men’s Doubles pairs enjoyed a good afternoon’s tennis. After 4 rounds of play Tom Van Klaveren and Ben Martin were worthy winners having achieved a clean sweep of four wins in the four sets played against their opponents. Second with three wins out of four were Mark Hill and Calum Ellison. Many thanks to Suzie Greenwood for organising the tournament and to Debra Norton for providing cakes and biscuits for tea.